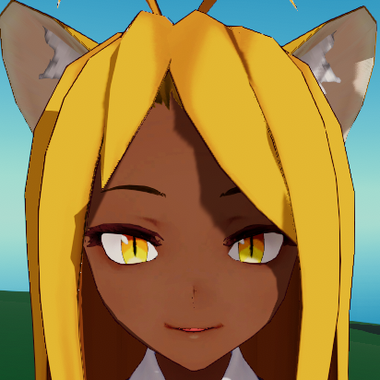 I'm currently developing a game (for PC and Android) called "NekoSuki! ~ Kitty Love Adventure", about a trio of heroes (a human young man, and his two catgirl friends) that must rescue Nyan-Nyans (cute humanoid-cat beings) who became lost in many different places.
But some of those troublemaker cats aren't willing to be rescued, and you must find a way to "whisk" them good using your gadgets. (don't worry, this won't hurt the cute kitties in any way!)

Some of you may find that premise familiar, and it's because NekoSuki! is very much inspired by the Ape Escape (Saru Getchu) game franchise. <(]8D
I'm aiming to make an anime-styled 3D Platformer in the same vein as Ape Escape.

But NekoSuki! will also feature a more mature story, focused on the relationships between a diverse cast of characters, especially the main trio's romantic bonds.
And as the main story will be focused on romance, naturally, it will feature sex scenes between the main characters, after their relationship grows to a certain point and they become close and intimate. :3

My intention is for the game to feature those sex scenes. But a version without the explicit scenes (but keeping the mature story themes) is also in the plans, for a broader audience.

I created my SubscribeStar page because I feel this is a great community that supports adult-oriented works, so I hope this will help to reach my target audience. And, hopefully, I can get support from subscribers, so I can focus on working 100% on my NekoSuki! project.
NekoSuki! is my dream game, and it's a story that I really want to show to people. :3

Some of my plans for this page are to post news about NekoSuki!'s development, and share prototype/demo builds of the game. To be clear, my intention is for NekoSuki! to be completely available for free. That means a fully-featured free game (with a clear start, middle, and end), without free-to-play mechanics, gacha, and related stuff.

In my opinion, even if those mechanics help "sustain" many games, it's to the detriment of the games' true potential. Free-to-play mechanics tend to strip down games' fun/gameplay (to account for the common free-to-play rules and patterns) and make them extremely grindy and addictive on purpose (sometimes even harmful to users).

And it's kinda unsustainable in the long term, because those games become too much dependent on recurring spending by the players.
Eventually, the players move on to another game (because players realize F2P made the game annoying/less fun than it could be, so they move on to the "next best thing"), stop spending money on it, then the game closes down and no one can play it anymore. A sad fate for a game.

Those are my reasons for not planning to add F2P to NekoSuki!. I want to make a game just like the ones that enchanted me during my life. But to keep working on the game, I currently have to work on unrelated projects/jobs to get money to pay my bills.
I hope you consider giving some support to me and my projects, so I can focus 100% on them and keep them freely available for everyone! >w<

Anyway, thank you very much for reading this post!
I also have other plans for this page. To spoil it a bit, I plan to make asset giveaways that may be especially interesting for VRoid users, or people wanting more stuff to customize their 3D anime avatars... ;)

Andy Miira
Public post
Hi, sorry for the lack of posts here on SubscribeStar.
Lately, I'm working on projects that aren't adult-oriented. That's the main reason I haven't posted for some time.

Anyway, since a few weeks ago, I'm having very productive development sessions of my indie game project. :D

Much good stuff happened during the last months, I got ahold of great tools to help development, and many of the tools I use had awesome updates! <3
I even contributed with bug fixes and integrations for some of those tools. xD
I also made some important tests with Unity and my tools, to simplify my workflow and make the game run as best as it can on both PC and Android.

I'm still working on my game's foundation before I start creating characters/levels/content, but I can already see the light at the end of the tunnel.
After the game's foundation is complete, that's when things will get very interesting... :)

I have to admit that my new project may not feature adult content, but I hope it'll still be an interesting game to post about in here, from time to time.
And I still plan to make 3D models of my (adult) characters and create some adult-oriented pictures with them.

Here's a little teaser of my new project. This is only a starter model, I'll heavily edit it later on, after I work a bit more on the game's foundation.
See ya! :P
TouhouProjectTouhouCirnoGameDevlogGameDev
Comments (0) loading...
Like(0)
Dislike(0)

Andy Miira
Public post
Hi! Yesterday, I've found out that VRoid Studio 1.0 was already been released (how I didn't know about that!? xP)
This stable version is FAR BETTER than the beta ones, it's like a completely different product. Much easier to create anime characters than ever! :3

I ran a quick test drive with VRoid Studio 1.0.3, these are my results:
I made Natsuki with her childhood haircut <3

Andy Miira
Public post
Hello to all!
I want to address that I lowered NekoSuki's development priority for now (both game and web novel), as I'm currently working on a freelance job.
It's being a great opportunity for me, to be working on the type of game that I like. I'm very happy about my current freelance contract! :D

But I'll still make progress on NekoSuki's game and web novel from time to time.
I didn't stop the project, I only lowered its priority for now.

Sorry for not posting any new version/video/chapter of NekoSuki.
I'll balance the time to work on my projects soon, after I make more progress on the freelance. :)
DevlogNekoSukiInformationInfoGamedevIndiedev
Comments (0) loading...
Like(0)
Dislike(0)

Andy Miira
Public post
Hi! I made some progress on NekoSuki!'s web novel. :D
I rewrote the Prologue and Chapter 1, and uploaded Chapters 2 and 3!

You can read the new and updated chapters on Quotev:
https://www.quotev.com/story/14330862/NekoSuki-Kitty-Love-Adventure

Andy Miira
Public post
Hi! Some of you may be familiar with NaNoWriMo, a writing event where you aim to write a work with 50.000 words during November.

I had a little progress with the NekoSuki! game last week, but as November is the NaNoWriMo month, I was focusing more on preparing myself for the event.

I'm currently writing NekoSuki!'s story in a web novel format. I think it's a faster way for me to tell the story and for people to know my characters. :3
During November I'll be posting more chapters of NekoSuki!

You can read it on Quotev:
https://www.quotev.com/story/14330862/NekoSuki-Kitty-Love-Adventure

$0.00 of $300
per month
To buy food and pay my bills for the month. I appreciate everyone who can contribute to this goal. It means a lot to keep my projects alive and freely available for everyone!