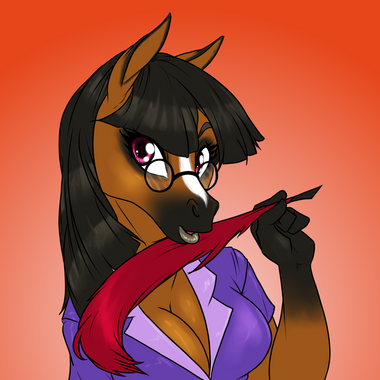 Dirty Little Secret
Welcome to my new "too hot for Patreon" SubscribeStar page! (Now featuring both Furry and Pony content!) Your support means a lot to me, and it's the reason I'm able to put a high priority on writing this kind of stuff instead of chasing after more commercial fiction. Thank you!

This post explains how to claim your rewards.
You can also check my Time Tracking Log, to hold me accountable and make sure I meet my goals.
Commissions are available -- check my Commission Roster and Information Page for pricing. Remember, supporters get discounts!

Get Early & Free access to all stories, suggest new story ideas to be voted on, and get a 10% discount on commissions.

Monthly vote on which idea from the ideas sheet to do next + 25% discount on commissions.

All of the above + 50% discount on commissions.

All of the above + 90% discount on commissions.

All of the above + 99% discount on commissions.

[Pony] Early Publishing: Nature and NurtureAn unusual one this time! Not only am I writing this w...

Dirty Little Secret
Public post
[Furry] August's Furry Story Voting Results
Almost ended up doing commissions again! The one that was picked is actually kind of vague, though... Heh. Now I've got to figure out just how to write this!

Your offering of a cozy sweater has pleased the Kitsune spirit. Now she offers you her boon. Choose wisely. Cover art: https://www.furaffinity.net/view/25777203/

A magical padlocked collar and a magical golden key. Whoever wears the collar must obey all commands from whoever holds the key. And only the key can remove the collar. It was made by some ancient wizard to control his slaves. Dark stuff. But ... my girlfriend seems to think it's a sex toy. At the most inappropriate times and places, she'll unexpectedly put the collar on and slip the key into my pocket with a wink. Not this time, though. That's enough. This time, I'm going to teach her a lesson about all this teasing, and I don't care if it gets us banned from Applebees for life.

Dirty Little Secret
Public post
[Pony] August's Pony Story Voting Results
A whole lot of story ideas are getting eliminated this month, but don't worry -- if any of your favorites got eliminated, you can always resubmit them as your own idea and they'll be in next month's poll again!

There was also a tie for first place, so I flipped a coin to see which one would win.

[NSFW] (anthro) Ember is absolutely *infuriated* to learn that Spike has been dallying with somepony named "Gabby". Spike is HERS -- he doesn't belong to some candy-colored pony! She heads straight there to claim what's rightfully hers. Catches them right in the act! But then... *Oh*... She's a griffon, not a pony. And she's *hot*. So perky... Maybe they'd let Ember ... join in?

[NSFW] The moment Twilight dreaded has finally come: Rarity broke up with Spike! Spike, of course, is inconsolable. For *days*. Twilight lets him have his grieving time ... but once it starts stretching out too far, she knows she has to do something. Something to take his mind off of Rarity and get him back into the dating game. Of course Twilight would never do that herself! Spike is like a surrogate son to her! ... If only she knew some Princess of Love who owed her a big favor... (Commence Cadance demonstrating to Spike that there are plenty of other fish in the sea. Bigger fish. More beautiful fish. More *talented* fish. By the time she's done with him, he'll be thinking of Rarity as a very average lover at best.)


Losers: Everything in red in the full results below:

SubscribeStar has really started messing with any links I post. Instead of linking to where I actually linked to, it changes the link to a SubscribeStar page that then redirects you there.

What's especially annoying about this is that the links won't work if you try to open them in a new tab. If you do it in a new tab, it will just redirect to the homepage. Which means that you have to open any links here on the same tab. (Maybe it might also have issues if you're using noscript or something like that? I think their links are using scripts as well.)

I know that's kind of a pain in the ass ... but there's nothing I can really do about it. SubscribeStar will do this to any link I post. I've complained to their support team asking them to fix it, but so far there's been no response at all. Maybe if you guys also send in complaints, that will get enough attention from them to address the issue?

Anyway, the important part is that if the links aren't working for you, you need to try opening them in the same tab instead of trying to open them in a new tab. If it's still not working for you after that, let me know and I'll try to figure out why.
Comments (2) loading...
Like(1)
Dislike(0)

[Furry] Early Publishing: InitiationIt's a miracle! Despite having a vacation this month, I actua...

Lil CamK
Hi! By subscribing, you’ll have access to everything on my feed! Including uncensored works, time lapse videos, bonus sketches, and more such as exclusive content sent through messages at the end of each month ✨ welcome to my lewd fantasy realm!
This website uses cookies to improve your experience while you navigate through this website. Continue to use this website as normal if you agree to the use of cookies. View our Privacy Policy for the details. By choosing "I Accept", you consent to our use of cookies.