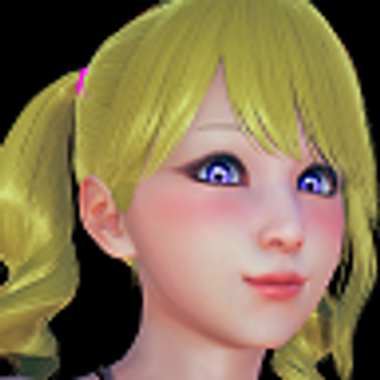 Be recognised as one of the top students! Join the School Council and influence the future of your school. - Early access - Subscriber-only posts - 4k Picture packs - Vote on which stories and characters are prioritised.

Queen of my Heart

Hello everyone!  Thank you for joining me for the pubic update, in which I'll talk poll results and show off a few new bits.  As I mentioned last week, the maps and coding work are now done, so I'm all in on the re-renders, which are now rapidly closing in on the halfway mark, and also the sprites.All five Alancias teachers now have updated sprites.  From left to right, we have first year teacher Eva Paris, who of course you've already seen, she's now joined by second year teacher Francesca Musumi, Third year teacher Stephanie Pupusa, Fouth year teacher Valerie Cuchucha and Fifth year teacher Beth Argolla.
I've maybe mentioned before, but most of these characters names, like many other things in my game, are exotic or foreign words meaning things like "woman," "lesbian," "vagina," etc.  It makes me smile to think of someone who speaks those languages playing a translated version of the game and thinking "why are the teachers at Saint Vagina's called Miss Lesbian and Miss Woman?"
Quest poll resultsAnyway, onto the poll results!  Spoilers ahead if you haven't played these quests.
No surprises in first place, that's exactly what I expected to happen.  And by an even bigger margin.  The Bad Girl's Bitch is a quest that at a number of times during its development I sat at my computer thinking "Am I going too far too early?"  Missy gets absolutely humiliated during the hazing ritual and treat like dirt after, which is, of course, what many of you wanted!
I think that Poppy's storyline is probably the thing most likely to give "more Jess content" a run for its money in the next round of School Council polls.  Planning for the next stage of her story is quite well advanced now and I have characters, situations and endings already in mind for part 2.  We'll be meeting her opposite number, the Popular Girls' "fixer" and Missy will finally have the opportunity to earn red ribbons of her own.  Yep, you can join the bad girls!
The mirror image story came in second.  Again, this story featured some pretty extreme stuff for the early game, including being fucked against your will by 6 bad girls in the toilets.  Well, I had to give it something to equal that hazing ritual and for dominant players, it hopefully made humbling Poppy at the end all the sweeter!
A pleasant surprise to see Queen of the Ring in third place, as I'd been under the impression that this quest had generally underwhelmed people.  Perhaps I underestimated the Jess factor!  I was somewhat limited in what I could do as so much of Jess's character development needs to wait until after Chapter 5, so while it would have been nice to have had the wrestling "lesson" in Jess's room go a bit further, it wasn't really possible because of how the main story is going to play out.  How about that naughty window scene though, eh?  Jess and Karen - that's pure nightmare fuel for our girl!
An honourable mention to Lola's relationship quest.  I think we can probably chalk that one up to her kinky preferences, seen in the sex scene at the end.  I've been praised for this quest depicting an actual love story with barriers, drama and stakes, but let's be honest, most of us just love the sight of tied-up girls.
The main questline chapters received a handful of votes each, but on the whole have so far failed to cause any real waves.  This is understandable, given that those three chapters were basically all just setup.  I'm confident that The Reign of Jess will break the mould.
Have a great week!
Trinian
PreviewBehindTheScenesPollResultsPublicPost
Comments (0) loading...
Like(0)
Dislike(0)

Trinian
Public post
Hello everyone!  This week's public post features an update on our progress towards a completed remaster and also a little poll just for fun.
The big news is that as of yesterday, the maps and coding work are now all complete!  Every area now looks right and (in theory) works as it did before.  We're back to where we started, woo!
That completes by far the biggest part of the remaster.  Over 80 maps, 8 quests, many repeating events and much more.  I've also added the names of characters to their dialogue, making it easier to distinguish who's talking.Here's Captain Elysee demonstrating it, along with the cute new face graphic for the town guards.  As before, this will be used for all of them for now, but later, I'll create a few different guard sprites and corresponding faces to add variety.  Elysee will get her own unique one at some point, as we'll be seeing her again.
Abbie's hot sister Malia joins the growing legion of updated sprites, as do an array of working girls from the Red Light District.  With the map and coding work done, this is now the next major focus.  It's about 50% done now.
A few face sets have been redone.  This is probably the most boring part of the remaster, which likely explains why I've been dragging my feet on it.  However, it won't take long to do once I get started properly.  Here is Becky's, which I did most recently:It's basically exactly the same as before, just in a better resolution, same as the ones you've seen already in Christmas Eva.  Like I said, these are super-boring to do, but I can knock them out fairly quickly.
Lastly, the re-rendering.  Since dropping the remastering aspect, this has greatly sped up, and as of today, I've redone 955/2576 (37%)  The only limitation on this is how fast I can reload the scenes, though some of the early ones weren't saved in full so there is a bit of work reconstructing them,
We are now entering an endgame with the upgrade to Missy MZ.  I still don't want to commit to a timescale yet, but the completion of the maps and coding means we're not that far off.
Now, last thing, it's been a while since we had a just-for-fun poll, and so after writing a retrospective of Chapter 3 for my supporters the other day, I got curious as to how popular each of the quests are, and which have been the most well-received so far.  So today's question is: which is your favourite Missy quest so far?  I have some idea which I expect the front-runners to be, but I'm genuinely fascinated to see the results.
Have a great week!
Trinian
PublicPostPoll
Comments (0) loading...
Like(0)
Dislike(0)