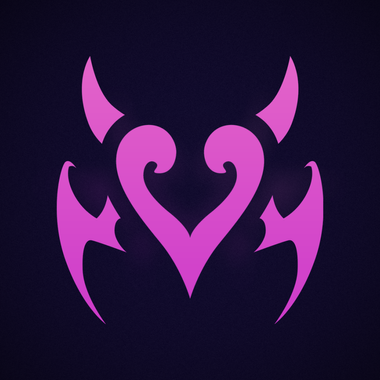 What is Virtual Succubus?

Sign the contract and become your Succubus’s personal plaything.

- Vast amounts of visual customization for your Succubus! -


Join the community on Discord for any feedback and questions

Anonymous feedback can also be given on the official site!

Thanks for supporting the game!

You'll get access to the latest Virtual Succubus stable builds, and the patron surveys used to collect detailed feedback.

Wow! Thanks a lot!

Same as the supporter tier, but with extra thanks for your generosity.

I really appreciate it!!

All of the previous benefits, plus:

Access to the test builds and test channels on the discord server, where you'll get early access to some unstable builds & ingame debug tools.

There's nothing I can offer worth this much money.

You're directly supporting my independent future as a creator and I thoroughly appreciate it. 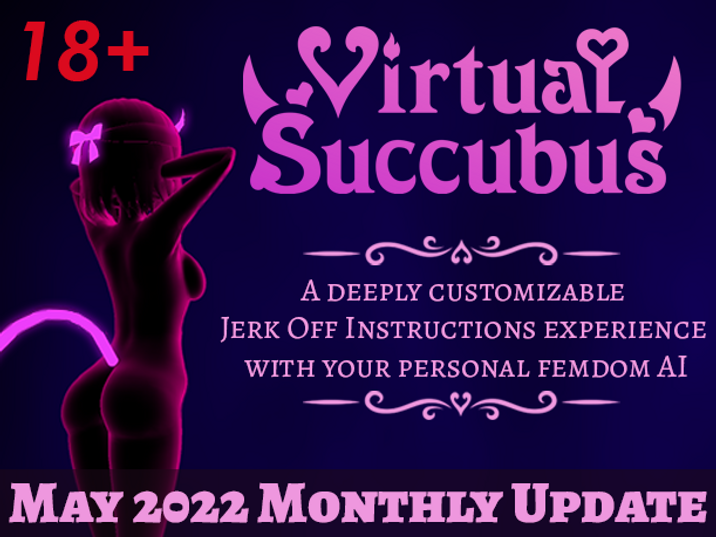 The main feature this month primarily applies to PC users but it’s been an overwhelmingly requested change since the game’s launch. I reworked the game’s UI to support all aspect ratios, meaning you won’t get black bars on the sides anymore on PC, and tablets should function better in general.


A collaring system has also been added, where she will control your collar-wearing and check on your dedication to it. I’ve been thinking the collar is an underdeveloped part of the game for a while, as it tends to be a significant part of D/S relationships. The options given should allow for several different levels of dedication!
Difficulty ranges have also been a long-requested feature that’s getting added this version. This allows you to set minimum and maximum value on each difficulty slider, allowing her to choose the difficulty at the start of every session. This should allow players to add greater noticeable variability to sessions.


For the first time since the game’s release, a new core task type has been added with this version! Core task types are tasks that can randomly show up at any point during the session, and are generally the main backbone of every session (Timed, Counted, etc)


Metronome Tasks are tasks utilizing the Counted Task tasklist, including all the procedural layers available for these tasks. Instead of having you repeat and count your own actions, your succubus will wag her finger to a certain rhythm, and expect you to match it, and sometimes count that.


Recently, I’ve had a focus on trying to increase the amount of potential failure points in sessions (I.E. making it possible to fail for experienced players). Last update’s edge counting was the start of this, and this new task type also involves similar elements; sometimes, she won’t just wag her finger, but also expect you to count the amount of repetitions she has you do (sometimes out loud, if enabled!).


There are also many different mischievous actions your succubus can take for these tasks! I’m really really happy with these, there was a lot of design space available for some very fun (see: rather sadistic) stuff.
As it is impossible to perfectly balance for every player, the intention behind these tasks is not to be especially challenging to perform, but to challenge the player in a different way (giving up control, counting while distracted). Of course, this task type can be toggled off, just as Counted Tasks can.


After frequent requests, I’ve also added a way to convert the existing session-based chastity system into a timed chastity system. It effectively utilizes all the same structure, but converts the sessions given into days at the end of your session, locking your access to your Succubus until that amount of time has passed.


Lastly, you’ll also notice the game has various new graphics including a new icon, logo, loading screen, etc. As the game is moving towards being in a good spot mechanically, with a lot of different directions to add content without adding more mechanics, it’s now time for me to start polishing up the experience to eventually head towards a full release. You can expect more of this in future versions; don’t worry, the maze of menus won’t stay this confusing forever.


P.S. Thank you for the surge in feedback using the new feedback forms on the website!
A lot of bug fixes and minor changes here were results of submissions to these forms.

Metronome Tasks
Dev note: Thanks to @Vector Vortex on the discord for the task inspiration. You can also blame him.
Timed Chastity
Pre-Task Edging
Dev Note: Feedback has indicated that the last few months of tweaks reduced the edging intensity in the game, this should bring it back, hopefully in an even more fun way. This also should combine nicely with the previous update.


I’m usually a rather private person, and I told myself I’d never play the “pity me” card, but something has happened recently that led to me wanting to maintain this page and I’d like to open up with an explanation and some backstory.


To start from the beginning, VS was… kind of a long shot after several years of working on games as a passion hobby. I saw there was a need in the market for something of this nature, I thought I could make something that fit and it seemed enjoyable to work on, and I figured, hey, at least I’ll get some experience for the future. When I started this project, I was heavily in debt from some failed online businesses that were attempts to detach myself from the grind. I don’t come from money, my family was no different. I was hopeful, but knew how unlikely it was to make it alone making games.


Well, somehow, it blew up. It’s been two years already (somehow?). The game is huge now, it’s grown to a level I couldn’t have dreamed of. It’s allowed me to change the lives of those around me, to remove huge financial stress from some ageing members of my family, and for me to feel like there’s a genuine chance to make it out there by creating.
Knowing the whims of platforms, for the first year of Virtual Succubus’s development, I would consistently wake up with cold sweats in the middle of the night and panic-check my phone to see if I had an email that would wake me up from what I really thought was just a dream.

In October 2020, a few days after I decided ‘’hey, this is safe enough I think, I’ll move out from my family home and try to start a life’’, it finally happened.
The guidelines team wasn’t ok with… small booba. The first few emails were unclear, they conveyed much more seriousness than the following discussions, causing, frankly, immense panic as to what they accused my game of being. After some exchanges, I resolved it by changing body proportions, and moved on with my life… somewhat.
From that point on, for a solid year, the day to day became ‘’if I’m not pushing this as far as I can, if I’m not dedicating my life to growing this, it’ll come back and bite me in the ass the next time the platform decides it doesn’t like me.’’.
I would be unable to sleep halfway through the night, tell myself ‘’Hey, if I get up now, work on this feature, this might just be the feature that grows the game significantly. Doing anything but totally dedicating myself to this would be unfair to everyone else around me that lacks the growth potential I have.’’
Months disappeared. 120 hour work weeks passed. I lived that way until late 2021. It worked, let’s be honest, you can see the numbers, you can see the creative output that resulted from it. It also led me way too close to burnout and I eventually grew pretty miserable.


Luckily, some things in my personal life happened and allowed me to detach a bit and stop worrying so much about the future. Life grew more… reasonable, and so did my relationship with work. The numbers aren’t as good, but I think the game is progressing along pretty well, the features are pretty cool, and while there’s a lot to do, the game is in a good spot overall.

It is May 10th 2022. The game’s second anniversary.
I receive an email from the Patreon guidelines team indicating that JOI content as a whole is no longer appropriate for the platform. It is equated to providing sexual services, and sexually gratifying content is deemed inappropriate for the platform.
I spend days exchanging emails as to how the hell that’s possible. I eventually succeed in convincing the reviewer that this is nonsense by consistently asking for second opinions. I am lucky that I’m able to do that.
I don’t especially want to go back to waking up in the middle of the night. I’m extremely lucky to be so heavily supported, I have a good amount of safety net, but at this rate, I will forever live in worry that Patreon will some day scrap all my efforts.

I've decided to start maintaining this page to hopefully try to not rely on a single platform's (sometimes not very reasonable) whims.
To be honest, this seems like the safest, best time. If Patreon were to go back on their approval of my page now, it would visibly be punitive. I’d hope they wouldn’t act that way, but simultaneously, I’d also hope they wouldn’t expose themselves acting that way.
If you'd rather support me here, it's very much appreciated as currently SubscribeStar is much harder to grow than Patreon.
Every person who decides to support here instead will contribute to diversifying the project's future safety, and help me feel more free to experiment without fear from platforms. Help contribute to the feeling that I can indeed make some weird shit that isn’t necessarily financially sound, because I won’t get thrown off a single platform and have my entire life turned upside down.

If you decide to do so, please know that I truly appreciate it and it makes a significant difference. If you'd like a Patreon refund to subscribe here instead, please let me know by DM by giving me the information on both of your accounts.
Thanks for reading my little wall of text.