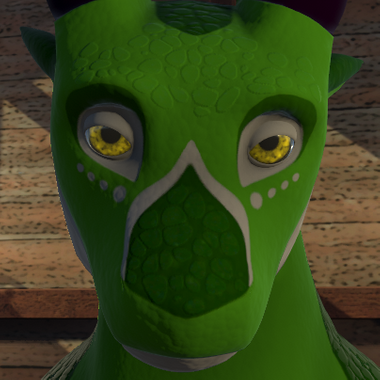 Softscale
By proceeding, you confirm that you are
at least 18 years of age.
Yes, I choose to proceed
Cancel
Cancel

For people who have nothing better to throw small amounts of money at.

Get your name real big in the credits! Thank you!


hey it's kinda like that "meet kade" teaser but for real now.

EDIT: wow, subscribestar picked a hell of a frame for the thumbnail there lmao

0. 6-alpha1-hotfix2[vr]CHANGED- Changed how full-body trackers are handled. The game should now b...

0. 6-alpha1-hotfix[desktop/vr]FIXED- Fixed some of the major performance issues. The game should ...

This is the last desktop-heavy build, adding character customization and a male player model. Up next is switching gears back to VR with full-body tracking.


[desktop/vr]
ADDED
- New menus, a saved game system, and basic character customization. Swap out body types and genitals, customize colors and patterns, and a few other things.
- New audio for the player and drake voices (including a male voice option for the player), and some new sound effects.
CHANGED
- Reworked the animations for the missionary and doggystyle positions to use the new setup that the servicing positions previously used, so those animations may look a little different.
- Upgraded to Unity's Universal Render Pipeline, so a few minor visual differences there.
- Performance and visual improvements for fluids.
- Updated the tail animation plugin I was using. Tail movement may look a little different, but tails should collide with objects more realistically as well.
FIXED
- Fixed a long-standing bug where arousal gain would accelerate over time. Arousal gain should be much more consistent now.
- Fixed some issues with odd shading and visible texture seams on the characters.
- Fixed/reduced some physics instability issues with drake's dick.
- Setting the audio sliders to their minimum will now actually mute them, instead of just getting very quiet.
REMOVED
- Ambient Occlusion has been removed as it's not currently supported with the new pipeline.

[desktop]
ADDED
- Added arousal, anticipation, and orgasms for the player character. The UI for this is shown in the lower-left corner.
- A new position where you can fuck derg's butt if the player character has a dick. To access it, select "Stand Up" while in the Servicing Rear position.
- You can now lean forward/backward again in POV mode, in poses that allow it.
CHANGED
- The camera no longer moves or rotates if the click/drag was started over a UI element like a button.
FIXED
- Fixed a bug where changing from the "Servicing Front" position to another position and back could cause animation errors.

[vr]
ADDED
- Added a new toggle option on the VR panel for "Finger Tracking". If you're having issues with your fingers not moving, turn this option Off to revert to the old control handling method, which should be compatible with more devices.
CHANGED
- Overhauled the menu system for VR. Instead of floating menus, they now appear on a tablet that you can hold, and resize by grabbing both of its handles at once. The tablet can be interacted with using the laser pointer from before, or by tapping your finger on it like a touchscreen.
- Opening the pause menu no longer freezes time. This was due to some requirements of having hands that can animate while the menu is open, but I may be changing it back in the future if I find a way around that. It's not a huge priority since there aren't any action-packed things going on that you would need to pause time for anyway.
- Some updates to the petting mechanics on drake's head - you can now push his head around slightly so it's a little more lifelike, and getting a pleased reaction from him now just requires your hands to be rubbing the sides of his jaw or the top of his head, instead of mashing the grip/trigger buttons in those areas.
KNOWN ISSUES
- When using the Centered Screen Camera option, fluids look flickery and weird on the screen (but look fine in the headset display). I've notified the developer of the fluid plugin but have yet to receive a solution for this at the time this build was made.
- Not sure when this started happening, but it seems like the right hand has a much stronger "push" force on physics objects. I'm not seeing any reason that this should be the case since both hands seem to have the same physics settings and colliders. I didn't feel like digging too far into it, given that the whole floaty hands setup will be removed and all the hand controls re-done and re-tested with the full-body implementation in the next build. For the time being, just be more gentle with that right hand :).
- Cum renders in front of the VR tablet even when it's behind it. Kind of a low-priority thing, will look into fixing this in the future.

Softscale
Public post
New dicks! Add some flair to your derg, and some flare to your throat.

Softscale
Public post
Making a mess! When one hole gets full, switch to the other~ (sound warning)

Softscale
Public post
Been doing a lot of behind-the-scenes stuff so not much of a visual update yet, but here's a clip with some of the new audio coming in v0.5, featuring the lovely PrincessLil.

This one brings the desktop version up to date with the content from v0.3-VR, and has a few improvements for VR things as well.

[desktop]
ADDED
- Two new positions: Servicing Front and Servicing Rear.
- Some audio support, mainly in the Servicing Front position. Additional audio will be added in v0.5.
- Kink preference toggles for Belly Bulge, Cum Inflation, and a new Cum-Through mechanic. Note that cum-through currently is only supported in the Servicing Front position.
CHANGED
- Updated UI to be consistent with the new style from v0.3.
- The bottom faces of the blanket in the doggy-style position have been removed, so you can now look up through the floor if you like.
FIXED
- Duplicate screen resolution options should no longer be showing up in the dropdown.
REMOVED
- Due to some changes in the animation system I'm using, you can no longer lean while in POV mode, so your field of view is reduced somewhat. I'll be adding this back in v0.5 when the new system gets properly implemented for the old positions.

Little WIP clip. v0.4 will be wrapping up soon.

I'm currently working through my to-do list for v0.4 - its second alpha build will be posted on my Discord in the next few days. If you're not there already, there should be a button on the left side of this page somewhere for you to join my server if you're interested in hanging out and/or testing alpha builds early.

v0.4 is mainly focused on the desktop version, getting its content up to date with the VR features added in 0.3. Short list of things I'm working on:
- Two new "servicing" positions for the front and rear of the derg
- Audio support
- Unified desktop/VR build support so you can choose which version you want to play

I'm also working on a few quality-of-life upgrades for the VR side of it, mainly when it comes to fluids and some performance issues.

Some other places to follow me if you aren't already, where I tend to post more frequent updates:
https://www.furaffinity.net/user/softscale/
https://twitter.com/Soft_scale

Note that this is a VR-only build: you cannot access the content / positions from the previous non-VR builds - this is just the new position. I'll be adding VR support for the other positions as well as a "Spectate" / free cam mode when I get to the next VR build.

As always, let me know if you run into any issues. So far the alpha builds have been tested on Oculus Rift, Oculus Quest (linked to PC, not standalone), Vive, Index, and at least one flavor of WMR. At this time I'm not planning a standalone Quest build due to needing to support native Oculus inputs alongside the SteamVR tracking that everything else uses, but I may look into it in the future.

A brief history of time for those of you who are just joining us.

FarmD is a furry sex sandbox game, focused around feral dragon x anthro player interactions. You are a farmhand, your drake buddy is the farm's watchman, y'all get up to some sexy pasttimes on your work breaks. In later builds I'll be expanding more on the "story" mode, but for now it's just a sandbox.

The game has VR and non-VR versions - the first VR build is in development at the time of this writing. All builds, shorts, WIPs, etc are available on my personal artdump site https://softscale.net/

Beyond that, my tastes are fairly broad and I'm open to suggestions if you've got ideas for things you'd like to see in the game.