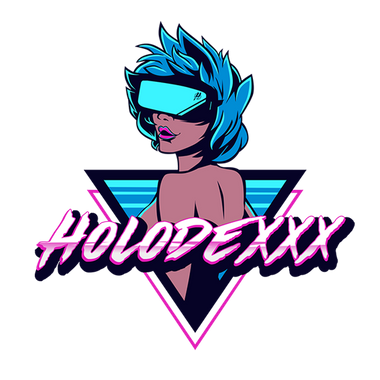 18+
HolodexVR
Holodexxx is the world's most sensual virtual human experience, built from the ground up for VR. We are daring to bring the world's hottest adult entertainers to life.
HolodexxxHomeEp1LadyEuphoriaInVr2D
Subscribe
Send Message

Heya backers! Here's an update on everything we have been working on at Holodexxx. Three fun demo...

First off, some good news. We've updated Experimental with an early look at the pose rig we'll be using for Holodexxx. It's a bit rough, but the building blocks are all there, and we're excited to see how far we can push this feature in the future. If you installed Holodexxx Experimental, the update will install on your next launch.
Walk up to the Holodexxx Logo hovering above the kitchen island, or the side chair in the lounge, and use the laser pointer to activate the rig. The laser pointer is activated by way of the Menu button on the Vive  and Rift (click on the icon in 2D).
Use the Pose Rig menu to turn off/on head tracking, reset rig, and add/delete saved poses.
We think you'll figure out a way to have fun with it ;)
So. Some of you may have noticed that Holodexxx made INTERNATIONAL PRESS this past week, and it's been an interesting ride. We were featured in PCGamer, Kotaku, TechSpot, and bizarrely, the Sun to name a few. But do yourself a favor, and never read The Sun.

Smut? How dare you.

Our website blew up, our video host privated our videos due to the spike in traffic, and we spent a good chunk of time answering interview requests.

Normally, we'd welcome the attention, but the reason we received so much attention was because our latest blog post went viral -- and the blog post isn't the greatest news.

Over the last year,  we have been working really hard to get a version of Holodexxx up on Steam. We felt/feel like some of our content should have been permitted on the Steam platform, but the reviewers we were paired up with had very different opinions on the matter.

We won't beleaguer the point here because the blog post does a good job explaining what went down, and where we feel Steam fails the adult dev community.

Needless to say, the massive attention brought in an influx of new eyes to our project, and we managed to get a bunch of support (A big hello to all of you new Patrons!) The new influx of support allowed us to buy the hardware we need to adequately test Holodexxx, and we can't wait to smash these damn bugs.

Reverb G2 and Oculus Quest 2 users will be happy to know that we can finally test our apps on your hardware. We have also purchased a high end videocard that will allow us to experiment on some advanced graphics options.

Losing access to Steam seems like blow, but in the long-run, there are many features that Steam would never allow on their store, which we are now free to explore.  We've also begun talking to a few alternative marketplaces, which might be interested in getting Holodexxx out to more Players.

So fear not! We are still trucking forward, and working our butts off on the next suite of features for EP3. We're getting ready to show off more of that, because we know all of you have been waiting patiently.

Now, go check out the pose rig, and let us know how you would improve upon it. We'd love your early feedback.

Thanks for all the encouragement we have received this month. It was greatly appreciated.

Holodexxx Experimental Branch now Live for SubscribersIn this branch you will find all of our con...

Heya Subscribers! Holodexxx Home: EP2 has been updated and it is much more stable … and enjoyable...