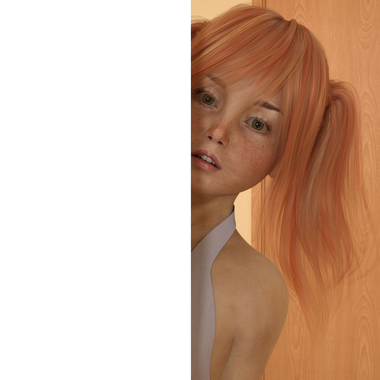 Some people might know me as "recreation". I'm creating adult VN's with focus on the story. For everyone else: I'm a one man game developer who also likes to see himself as Artist and I also tend to create and release assets for Daz3D (for free).

Thanks for your support²!

You LOVE what I do and want to support me even more. Thanks a ton! Thank you kindly :) - You'll get a special discord role and a special render every month, the content is decided by the highest tier.

You can't get enough of me and my stuff and want to become involved in the developement. Thanks, you're awesome! - With this tier you'll be able to test the same version my Editor get's as soon as it's ready. - You'll get a special discord role and a special render every month, the content is decided by the highest tier.

lol - With this tier you'll be able to test the same version my Editor get's as soon as it's ready. - You get access to my non-free assets on discord. - You can request a special render every month.

You are a pelican... You get everything everyone else get's and my unlimited gratitude. (I seriously have no idea what else to give)

TL;DR: be a tester+ tier, go to my discord , link your subscribestar account to discord to get access to the beta channel (profile page settings > communication) , download beta, report bugs :P
So, I've done a tiny little bit more than I had planned, so it got a bit longer than expected, and there's less stuff finished than I wanted... just saying so you're aware^^
As usual, there's stuff missing, mainly render, but also a few animations, especially to the end of the content.
I'll also redo the female mc animations towards the end of the game that are currently in the beta, I'm not happy with them.

Yep, it's getting closer.
I'm currently at 583 render, so already more than I had expected, and I'm still not entirely sure how much more it will be, but 600 should be easy^^
Depending on how the beta goes (how much there is to fix xD), I might do some additional animations, but we'll see how it goes ;)
Just as a reminder, I'm using a different animation technique now which I had to learn how to use, so the first one and a half months or so (all of january and a good part of february) I did basically just testing and practicing. I'm still not entirely happy with the results (I might add one or two of the failed tests in the special gallery), but I'm at a point where they're good enough so I don't feel bad to include the animations in the game anymore^^
This means two things: the time I had for the update wasn't as long as it looks from the outside, which means there isn't as much content as usual, but it also means animations will be easier and therefore faster to create from now on.
Stay tuned!
Comments (2) loading...
Like(9)
Dislike(0)

Quick update:
Almost 400 render done, all animations done.
As I said before, this is going to be a shorter update, I expect to get roughly 500 +/- render done overall.

Most of the animations are done, the important ones^^
I'll finish the rest of them when all the scenes (renders) are done, so I can focus on finishing the scenes for now.
I'm making good progress on the scenes, but I still have no official eta yet. As I've mentioned before, it will be a smaller update this time, and I'm not sure how many of the planned scenes I'll put in this one.
Nonetheless, it won't take that long anymore ;)