ThaumX
By proceeding, you confirm that you are
at least 18 years of age.
Yes, I choose to proceed
Cancel
Cancel

Show your support without breaking the bank and help with the development of Accidental Woman.

Help development of Accidental Woman by pledging at the Beta Tester Tier, and get access to content as soon as it is completed.

Really help development by pledging at the Backer Tier, and enjoy all the game features restricted to Backers.

Show that you're a fan of Accidental Woman by pledging at the Elite Tier.

❧ Previous rewards ❧ High-resolution copies of any game art created/commissioned for the game ❧ Have your name (or name of your choice) put into the game for an NPC or location (this reward takes multiple months to earn. See the website for details.) ❧ 4 votes in development direction polls 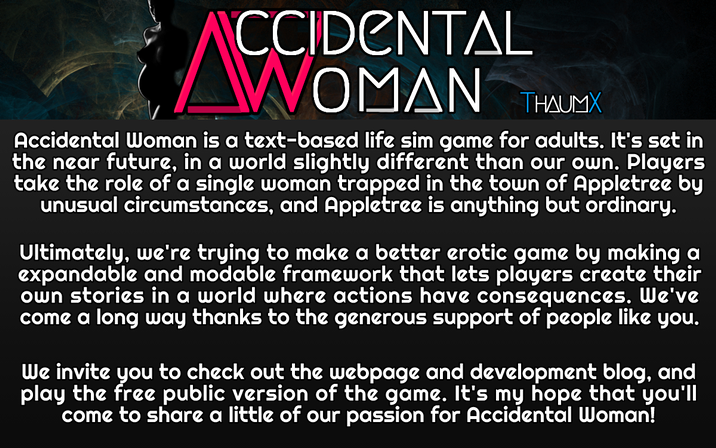 Straight from the Farm Coop in Muschi Valley!
This is a quick blog update, as the bugfixed version of 38 will be available shortly.
Update

This is an actual building in Warsaw. Check out the latest dev blog post right here!
Update

It's been a little while, hasn't it? You can see what's been going on with me, along with some discussion about upcoming development right here!

There's a new dev blog post available to read right here. This one covers what we'll be working on this month, and also has a fix for a BestyBug that can cause problems if you have a job working for the Institute.

It's been a busy month, but we've still got a lot of changes for you in this version. Check out the change log here.

As mentioned in the previous blog post, time was getting tight for this release. We've found more bugs than expected, especially from the Anenn segments because he's still a kitten. Then the wiring in Besty's flat somehow developed a short, and now the only circuit that doesn't immediately re-pop the breaker is the one connected to his washing machine. Then this morning, I woke up feeling ill on top of a greater-than-average level of household tomfuckery.


Besty has concocted an interesting daisy chain of surge protectors to get back to work, and most of the issues we've found are straight forward to fix, except for perhaps one... Anyway, we'll get the release done, but I don't think it's going to happen on the 5th. We'll try our best for the 6th (Wednesday) Guam time, but it might even be as late as the 7th (Friday). Sorry about that!
Now it's back to work for me!

Better late than never, it's a new development blog post. You can check it out right here. This one mostly covers our progress before the release next week, with a mention of getting a new freelance writer. Paid people on the AW project has now grown to three full-time developers and four freelance writers... It feels a bit surreal when compared to when we started!

It's that time again, there's another post on the AW development blog that you can check out here.

I've got a quick dev blog post for you right here. This one covers what we'll be working on this month in broad strokes (hint: content).

It's time for the public release of version 0.35.1! You can check out the change log here, and you can download it here. Please remember to extract the zip archive.
Enjoy!

vilelab
My name is Adrien and I am the creator of Vilelab. Currently, I am working on a fully interactive game called Indecent Desires.Please check out my website at www.vilelab.com for full details about the game.
Black Opium
We are an adult animation studio.Making long story animations series. 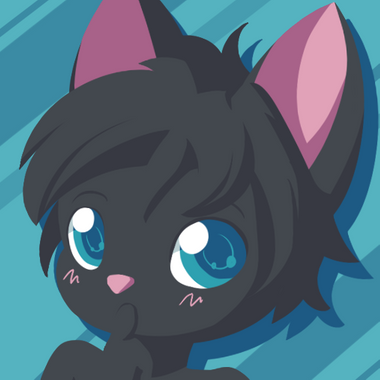