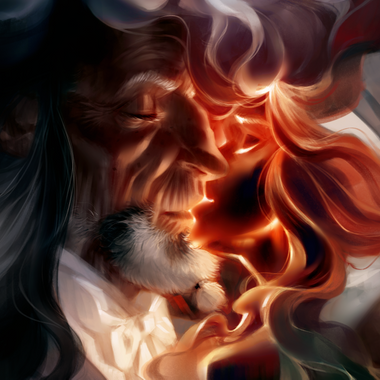 MoltenGoldArt
My name is Namiin Stone, and I live in fantasy worlds full of strife and full of grief - but, they are worlds overfull with love and longing, too. A tender ache in the space where darkness and desire coalesce into the surreal and taboo.
November 05, 2019 06:16 PM
Public post
This content was created for artistic and entertainment purposes FOR ADULTS ONLY and may include pictures and materials that some viewers may find offensive. If you are under the age of 18, if such material offends you or if it is illegal to view such material in your community please exit the page IMMEDIATELY. All depicted characters are fictional. No live victims were produced during this content creation and no harm was imposed upon any live creature. All characters depicted in sexual situations are 18 years of age or older and of the age of consent, even if it looks otherwise. Acts depicted are all consensual.

The incestuous desire portrayed is not the protagonists' problem, though it is titillatingly taboo.

My stories and my heart are not for everyone - and that’s okay; they aren't meant for everyone. They are for me and mine, first and foremost. But, if you've found me here, and you like what you've found, I implore you to sit by the fire with me and listen for a while.

I hope, if nothing else, that I am an entertaining storyteller. ♥

WHAT YOU'LL FIND - THE THEME

Playing with the concepts of age, lived experience, and maturity between an older man and his much younger daughter is thrilling and titilating to me. There's something about the contrast of gnarled, aged hands skimming over the surface of an unblemished young woman's throat that's just so...

I play a long game, as a content creator.

My current novel and illustration project is called The Summoning, which takes my husband and I's characters - Idris and Ila - from their original setting and throws them into a modern, human, supernatural alternate universe.

Divided by space and time, only to come together again after so long that Ila never understood herself; was never given the opportunity to understand. So long that she doesn't know why she's so drawn to the old man who calls himself Idris, nor why his intent is set so fiercely on seducing her and claiming her heart for his own. He isn't real, after all, he can't be - he is only an illusion, a figment, a product of a grieving mind, surely?

Ila, a girl who thought she was abandoned and unwanted, untouchable and strange - only to discover through loss, grief, and an inexplicable haunting that she had not been abandoned at all. She had been stolen. She wasn't untouchable; she was only ever meant to be touched by one and one alone.

I have a Discord server where I get to interact with you guys in real-time. ♥ I post everything that I make to my Discord first: sketches, WIPs, story snippets, and doodles get dumped in there before they go here. SubscribeStar gets to have the lions' share of the meaty posts I make about my process and deeper thoughts related to my artwork, though.

You can also share your art, ask me questions, and get a whole feel for who I am as the person you're supporting in the server. And hey, maybe you're not ready to subscribe - that’s no problem at all! Stop by my Picarto.tv when I’m streaming to get a feel for who I am and what I'm like, I'd love to meet you!

If you'd like to become a part of my server, become a Subscriber and there will be a button that pops up on the left of my profile page - click that to gain access.

If you're not interested in subscribing but you'd like to get your hands on my past fanwork, I do have specific packs available for sale on my Gumroad store. Any little bit goes a very long way. ♥

THANK YOU - YOU ARE EXCEPTIONAL

For those of you still with me: I want to extend a sincere, heartfelt thank you for considering becoming a subscriber. I couldn't do all that I do without the wonderful folk here supporting me. My subscribers and this platform give me the freedom to breathe for what feels like the first time in my life, and they give me a reason to continue creating and curating exactly what is my most vulnerable, authentic self.

So, honestly, even if you're just reading this welcome post all the way to the bottom and not much else, that's good enough for me, and I thank you for it. ♥