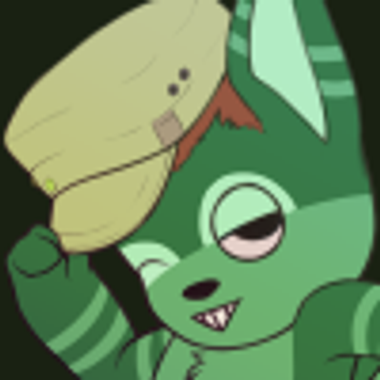 Lina's Quest
Public post
Here's the low resolution version of the next page! Just a silly little set up for the last remaining set of pages that will showcase a LOT more fun~ >:3
HyperFatMuscleCumflationGrowthLinasQuest
Comments (0) loading...
Like(1)
Dislike(0)


After some time thinking things over, I've been thinking of switching gears over from comics to video games. A very bold and possibly concerning decision but I have listed off a possible FAQ for those curious about it:

1. Is Lina’s Quest going to be a video game project from now on?
It all depends on how well the small scope video game does! If it doesn’t get the desired reception by the fans, then I will resume things through comic pages. Simple as!

2. Why do you wish to go from a comic to a video game?
Honestly, I don’t fully know the answer to that myself, I just feel like this is something that would be way more fun as a video game instead of a comic!

3. Will this game continue from where things left off in the first chapter of the comic?
That’s the plan! However, I will try to make it welcoming to those who haven’t read it as well, even though it won’t be any longer than say 10 or so pages total.

4. What kind of game are you planning on developing? How big is the scope of it?
If you haven’t already guessed, it will be a 2D turn-based RPG! I will be taking large inspiration from the Mario & Luigi series as well as Chrono Trigger when it comes to combat. Exploration will be your usual standard affair of visiting towns, gathering info, buying items finding treasure chests and other goodies, etc.

This game will be developed on RPG Maker MV, which has created many RPG titles and even some lewd ones such as Karryn’s Prison on Steam!

Since this is my first foray into making video games, the first game’s scope will be rather small. I plan on making one main dungeon you work your way into exploring and hopefully it should give players an idea of what the game has to offer and what they could see more of in future. Oh, and yes, the game will be +18 so expect a lot of lewdness throughout!

6. Will you be listening to feedback on how to improve the game? Will patches be involved?
Of course! No one ever truly makes their first project the best thing ever (unless you’re a fucking wizard or something). I will be willing to listen to constructive criticism and nitpicks players may have with the game, and I will do my best to address them the best way I can for potential sequels. Patches will obviously be made to the game if something feels OP or underpowered, or if any kind of glitches are discovered that weren’t found by testers.

7. Will there be early access benefits for this?
Most certainly! By pledging to the project (tier level yet to be decided), you will gain access to content such as previews for new moves, animation, sprites, etc.! This will include some playable demos to see what works and what doesn’t. You’ll also be named in the credits for being part of the project in one way or another!

8. Will there be a public demo released for this?
Once the game is in a stable enough condition, I do plan on releasing a public demo to gander interest. For those who pledge to the project, they’ll be getting the demo first before the rest of the world does. Only fair if you ask me! Would also help to see if whether there’s any glitches that might need to be squashed before it gets released publicly too.

9. Are there any plans on making a SFW mode for this game?
No, not really. Even if I did make one, I doubt sites like Twitch would allow for a game like this to be streamed on their platform. Besides, the main combat will heavily focus on some lewd aspects, which would only cause more problems with development if I had to tone it down.

10. Do you consider Kickstarter as a potential way of gathering interest?
Short answer? No. Long answer? No. Well, at least not right now. I feel like I would need to prove myself before I dared launched a Kickstarter campaign for a game title like this. Most successfully funded projects were hosted by developers who’ve made some games beforehand, and I’m a complete greenhorn in comparison. Once I feel more confident in my development skills, this could be something in the cards to make an even bigger game project.

11. This project is only on SubscribeStar so far, and I would rather prefer to fund it through Patreon. Would you consider reopening your Patreon?
If there’s enough demand, I will consider it. I chose SubscribeStar over Patreon due to how much they undermine NSFW content creators there and have put some of them through the ringer needlessly. Heck, it isn’t just NSFW artists who had problems there, some popular SFW artists have had issues there for various reasons.

Mine was how much tax they took out of your funding, and for someone who’s starting out, it felt way too much was taken away from me. May seem petty but it sure rubbed me the wrong way. Despite all that though, it isn’t off the table per se, though only if people really want to fund it through there.

12. I’m in the highest tier where you can be a potential cameo. Would this still be an option for the game project?
I would like to say “yes” to that, however I’m fully aware that it’s not going to be possible to cram in EVERYONE who were to pledge to the $8 tier. I haven’t quite thought of a solution to this, though maybe I’ll add an additional or alternative incentive to make that tier worth your while somewhere down the line.

13. I only wanted to pledge for the comic, not for a game project. I don’t wish to fund this project anymore…
I will understand your decision should this be one of them, I’m aware of how much of a change this all is but I would like to thank you for your support. It didn’t go unnoticed. <3

14. I would like to help with this project! Would I receive payment for my efforts?
If you think you could help with this in any way, I would love to hear from you! Although in its early stages, it will likely be done as voluntary work until there’s enough funding to go around to go handing out payments in a comfortable fashion. I wish to keep the dev team small for this one, and I am currently looking for these kinds of people:

·  Musician/Composer
(Ideally one who can make NES and/or SNES-like sounding music)
·  Writers
(Mainly for scripts and proofreading but can help with the story)
·  Pixel Artists
(I currently have one on board, but I don’t wish to lump all the hard work onto him!)
·  Additional Programmer
(Someone who’s messed with RPG Maker before and is willing to lend a hand)
These are just a few off the top of my head that I can think of that would help breathe more life into the project. If you think there’s something here that isn’t listed and you would be able to help with this, don’t hesitate to come forward!

15. I have a question that hasn’t been listed on here!
If that’s the case, feel free to ask me and I will do my best to answer them!

So far, I've been fiddling around in RPG Maker MV by following a video tutorial guide and I've been getting better understanding of how things function. However, I still have a ways to go and the comic still needs to be finished first and foremost! I wish to use originally made assets for the project but will see how things go!

That's all for now, thanks for your patience with me in getting the comic done and I shall see y'all around~ :3

Lina's Quest
Public post
Hey, in case I didn't make mention already, uh, Page 7 is already up! This is an announcement more for the free users so apologies if ya got your hopes up on there being a Page 8 juuust yet. <xD

I do plan on making a public announcement regarding the future of Lina's Quest. It's a rather important one but hopefully exciting at the same time!
Comments (0) loading...
Like(0)
Dislike(0)

Lina's Quest
Public post
Finally, HERE'S THE NEXT PAGE FOR Y'ALL! I will eventually get around to converting all pages into PNG format. Why the heck did I think JPEG was good? <xD

Hope ya enjoy! I promise the next page won't take nearly as long! xwx
HyperFatMuscleGrowthCumflationLinasQuest
Comments (0) loading...
Like(1)
Dislike(0)

Here's the low resolution version of the next page! Just a silly little set up for the last remai...

Here's the next page! Just a silly little set up for the last remaining set of pages that will sh...

$1,262
to reach
the Goal
Hitting this goal would be a dream come true. I would be able to afford comfortable living wages every month and do this thing full time!