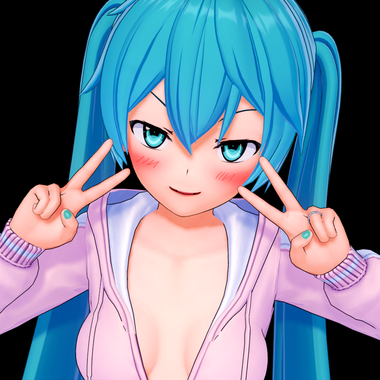 Hatsune C
By proceeding, you confirm that you are
at least 18 years of age.
Yes, I choose to proceed
Cancel
Cancel

Thank You and welcome to my page. I hope you'll have a good time :)

Thank you very much for supporting me. Let me know if you want to get any of the existing animations from any video, with different girl.

WOW O_O Thank you so much.

Any girl from my roster is available with 1 exception. Hatsune Miku will be always paired with my main male model, or with futa girl.

Please note It may take me some time to make this video.

Single link to all of my currently released videos, and stuff. This link will be active for few w...

Visual Novel update moved to Monday evening.
I had some technical issues with the software (my PC crashed when I was preparing animations for the Miku video, and it screwed up my textures), and so I had to spend half a day fixing it, so I couldn't prepare samples for the game.

Hatsune C
Public post
Heyo :)
I'm back.
I had to take a little more time off, because I wasn't feeling too well, but I'm all good now >_<

New episode for NTRGF Yukikaze
will be up a little later (late Friday/early Saturday)
I am writing dialogues for it at this very moment.

Visual Novel update
will be available on Sunday, with new samples, and details.

Next big video is the Miku day special
Will be available to watch on 9th of March.

God's Blessing On This Wonderful Harem-2


Recently I've been receiving more questions regarding the route, (if we are on the roommate route).
I don't want to spoil anything, since it will ruin the story, so I will neither confirm, nor deny it.
But let me just say that - I GUARANTEE YOU the NTR part will be very satisfying regardless of the route, and I am sure you will like it (especially if you'll manage to trigger the true Bad End - aka the most evil/fucked up ending)

You'll just have to trust me on this one :)

Meruru social media debute, in March
-baraag.net
-pixiv
-twitter (probably not for long, since this platform hates lolis, but eh, why not)
I will use it mostly (to hopefully) gain more recognition, and to spread some Meruru love, (she will just have fun perving over the world) :3

Miku Day 03.09 Special Video
"Violated During Live Stream"
Just as the title says.
The theme for this video was decided by your votes in a poll.
It will be slightly more brutal than my usual Miku videos >_<

MMD Dance video in March
I'm thinking about Shinobu x Chloe futa Dance n Fuck video.......
Or Yukikaze, we'll see.
I still don't know which song should I use, so if anyone has any suggestions, let me know.

New Mega Link will be available on Tuesday.

MORE DETAILED UPDATE FOR OTHER VIDEOS NEXT WEEKEND

Hatsune C
Public post
Note
Apparently Miku will have an anime (which is terrible news, cuz they will completely butcher her personality, and character)
Therefore to counter it.
We're gonna go hard on Miku content starting from march O_O
Starting with her special video on Miku Day (03.09)

Again, you can pick as many as you want, but try to limit yourself to around 5-7 >_<
It will give more accurate results.

Annual genre poll ie - what type of videos would you like to see more often. You can select as ma...

- Valentine's Day event
Final episode will be available on Thursday evening.
I will start rendering it shortly, but since this video has few animations, it will take longer for it to finish.

- Next week we are going back to the old schedule.
(ie - new NTRGF Yukikaze episodes during the week, and longer videos on the weekend.)
I will try to finish 2 long videos, still in February.
- Takamaki Ann Netorase Series EP03 (Final)
- Konosuba EP02

- Taiga NTR EP01
As a reminder. story in this series will be quite heavy/dark.

- Visual Novel Update in March (with a new sample)
I will start posting regular updates for this game, including more samples.

As a reminder you can send messages to Yuki again (post it in the comments, send it to me via private message, or through discord)
Be sure to watch the latest episodes first !

Messages to Meruru will be open again after the next episode.

$1,000
THE GOAL
REACHED!
My current goal is to finish my first Visual novel. Oshino Shinobu is a main girl in this story.