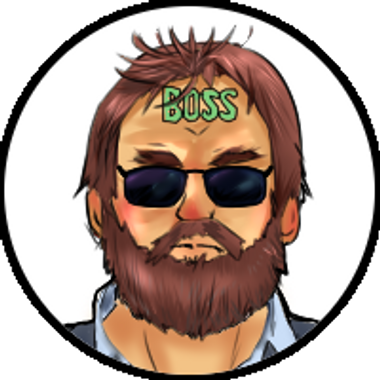 EternalsDeveloping
Hi there, and welcome to the SubscribeStar page for Eternals Developing.

Right at this moment, we're in the middle of adding a rather big update to the game, where we introduce and add the second main character to the game, and so until we've got all of that properly pinned down, there won't really be any updates to the game itself. Instead, I'll be focusing on making developer logs and trying to detail how the update is coming along.

I'll try to post as much as I can in public posts, but for the juicier details, you'll have to sign up as a subscriber. Me and the team look forward to seing you in the ranks!

This tier gives you the Fledgeling Adventurer role in Discord.

This tier gives you the Novice Adventurer role in Discord. You also gain access to the latest version of the game, but the cheat menu has been turned off.

This tier gives you the Established Adventurer role in Discord. It also gives you the latest version of the game, with the cheat menu enabled. Finally, you will also gain access to NSFW preview art for stuff that hasn't yet been put into the game.

This tier gives the same rewards as the normal Veternal Adventurer, except that you will also be given the opportunity to co-design, within certain limits, one monster or trap, to appear in the dungeon.

This tier gives you the Legendary Adventurer role in Discord, which in turn gives you access to certain developer-only channels on the server. It also gives you access to the latest build of the game, complete with the cheat menu enabled. You will also be given access to both the NSFW previews and HQ finalized art from previous tiers. Finally, you will also be given the right to co-design, within certain limits, one encounter with an NPC within the dungeon.

This tier is only here for those who have too much money for their own good. It will give you the Hero role on Discord and give you access to everything from the normal Veteran Adventurer tier. Since we wish to keep this reward unlimited, we have decided to not allow you to co-design anything for the game, lest we run the risk of getting flooded with backer-created content.

Welcome, Adventurers! This is the first post I've made that is locked to those of you who are awe...

I feel like I'm repeating myself, but Hi and Welcome! This will be my second Subscriber Only post...

Then, we finally have the concept sketches for Vage. This is a pretty big archived file (sits at ...

Then we have the concept sketches for the new monsters. The one with color patterns are the Alrau...

Alright, so first up are the new sketches for Deapth.

Feels like I always start writing these things early in the morning. Well, maybe not early to some, I guess. It's 8.30 over here, I'm sure some people have already been up and at work for a few hours by now. Anyways, it's been a while since I wrote anything (again) so I figured it was time to give an update.

Coding is proceeding as intended, for all updates I'm recieving, but the pace is as slow as always. Hard to make it faster when we're limited to 10-15 hours per month (my personal finances don't permit more than that and the income from our supporters looks a bit too instable for the coder to accept revenue share - fully understandable) but we're doing as best we can.

The main artist has proceeded with further concept designs for Deapth and has also started working on the boss for the second floor, as well as some of the monsters that can be found in The Hive. I posted most of these in the discord server, but I'll also post them here. You'll need to be a subscriber to see those, though. Quality is as high as always, but the speed is a bit slower than I would hope. To be expected though, what with real life work and the general state of the world being as it is.

The interface and background artist is doing his job as well as one can expect and the only thing holding us back from simply churning out one background after the other is the current budget.

Our music composer is still busy with university and exams and thesises and stuff (never went to university myself, so I don't fully know what it means) but thinks she'll be able to get back to work once that's all over.

Sadly, I haven't heard back from the script writer since I got back from hospital, so I've begun looking for a replacement. I have a few alternatives, most of which I've worked with before, but their are either a little bit too expensive for what I can actually afford (making the rate of production slow down even more) or a bit too unpolished in their english skills for what I want to put in the game (again, making for delays due to me having to edit the texts after hand).

Then lastly there's me, of course. I'm working on designing the map layout, such as where traps are located, where special events should take place and where campsites can be setup for the next part of the dungeon, a place known as The Hive that will feature mainly insectoid monsters. It's scheduled to contain six different monsters, two new traps, three new bosses and two NPCs that can be found, rescued and brought back to the main community on the second floor of the dungeon. It will also be used to progress the parts of the story in the game that feature Vage. How much of this will actually be included in the game remains to be seen, though, but this is what has been planned.

Due to a request from one of the supporters, I've also compiled an archive containing the various character design art for Vage. To gain access to that, however, you're going to have to subscribe.

Sorry for the long post, thanks for taking the time to read it, and thanks for caring about the game. Hopefully, we'll have a new update in the not too distant future. Take care, be careful, and have a good time.

Here's some updated lewds and a few new ones as well:

Background ImagesIn the public post, I promised some updated background images, so here they are:...

$21
THE GOAL
REACHED!
So, at this specific point in time, my goal is merely to get as much through SubStar as I had on my Patreon site. If that is fulfilled, I'll feel that one mission has been completed.