Puritysin & Caotico Comics
Unique Let's Plays, Artwork, Comic Book series
March 31, 2019 16:25
Public post
This content was created for artistic and entertainment purposes FOR ADULTS ONLY and may include pictures and materials that some viewers may find offensive. If you are under the age of 18, if such material offends you or if it is illegal to view such material in your community please exit the page IMMEDIATELY. All depicted characters are fictional. No live victims were produced during this content creation and no harm was imposed upon any live creature. All characters depicted in sexual situations are 18 years of age or older and of the age of consent, even if it looks otherwise. Acts depicted are all consensual.

An early update with tig o'l biggie news! Hey everyone been a while since I did a public update. So not much to update other then we have the teaser for issue 2! Now we just need to hit the goal to do issue 2 and 3. If we hit that then well..We not only will do a comic strip every week (some will tie into the comic some will just be stuff like The Forgotten Toon or Lily.) but we can bring some help onto the comic.

Btw first poster of cleaned up teaser out here and other version will be out next week.

Uncensored vids will be up later today and stream will hopefully be next Thursday!!

So big exciting news! We have had a game dev come to me about being allowed to put some of the nude versions of our girls into their game. I am not going to say names yet but its one of the games you guys really enjoy. I've not only given the ok and the files but Bosco and I will be designing some of the girls in outfits of the characters in the game (don't worry they will be both clean and naughty versions) so its the return of nudity (look it was on break even dat ass needs a break 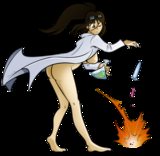 Next week i'll be putting up a vote exclusive for Patrons (and substars) to vote on which characters they want dressed as certain chars from the game as well as ideas for poses!

Also also! Don't forget to put in you're art requests. Come on guys you can do it! You don't have to stay to the theme but come on people lets see some creativity .

Love you all! Thanks a fucking ton for talking me into RE2 remake early...you dicks...you know who you are..im changing that sound effect!