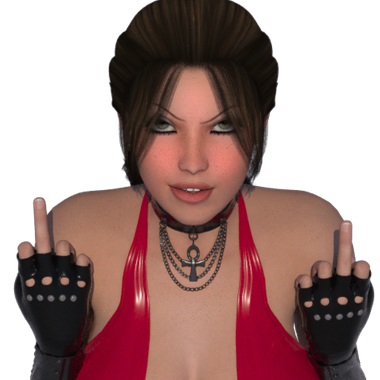 Get Access to FutaFighters The Mainstory comic. This is a 1-page a week comic some times more some times less depending on the time. I will be working really hard in making this a very high-quality comic so I will need as much support as I can get!

Warning contains Raceplay and other Offensive material not suited for all people! Might contain words or imagery that might make you feel uncomfortable you've been warned!

Whatever I think is too spicey will go here! This is the place you come to see characters I wont normally have getting dominated being dominated! Aslo you get to see what 50$ subs request if I think it fits that catorgary! You can also request a solo simple pin up render from one of my characters!

Everything from all other teirs plus a 2 characters request! Rules on requests. Rule 1 please ask before joining and please tell me what your request is. Rule 2 I may decline your request but I may work with you for something else. So again ask before joining. Rule 3 if you have already joining then you are basically just donatinging to futafighters! Thank you! Please please please ask for requests and if not thank yo very much for subbing for 50$ it means a lot to me!

FF3DX
Public post
Please Read  plus things may change later!
In the near future, I want my futafighters at Subscriberstar to be more accessible for people that don't wanna spend 10$ or higher a month. But before I tell you what my idea is for the future of 1$ subs let me explain why my prices are so high and why they will continue to be high for a few things. It's simple really I care about the characters Iv created I care about my creations that I have spent years to perfect. My characters have their own story hopefully a nice big long rich story down the road. So now let me explain what my tiers are and why.
1$ Tier
Get Early Access to exclusive Futafighter content plus Super Early Access to my main FutaFighter Comic FutaFighters. It's an ongoing project that will hopefully grow to be hundreds of pages long if not thousands!

10$ Tier
This is a place to come to when you want shorter comics that I might make with random characters that might not be part of the long comic, "MIGHT" some character will be part of the long comic. These comics will not really have too much plot they will mostly be fighting and fucking and that's about it with some text and trash talking if I feel like I also might add text and trash talking later. ALSO IMPORTANT I May sell these comics later down the road if I feel like it, this is a warning to everyone that thinks these are 100% exclusive they are mostly exclusive however I will most likely not sell these right after completing them so they will be mostly exclusive for a while.

15$ and Higher sub warning. I post things slower the higher the tier is, it simply can't be helped. This isn't some plot to get more money out of you or anything like that it's simply I am trying my best to post for every tier when I can and sometimes I wanna tell a story for a character in a lower tier before I wanna post something on a higher tier. I do try tho unless you are a 50$ tier but more on that down at the 50$ tier talk. Simply I will try to post on 15$-20$ as fast as I can when I can but it takes time. I do try and get at least 1 or 2 renders in a week for every tier except for 1 and 50 but hopefully not so much for 1$ tiers once the long comic starts.

15$ Tiers
Get access to all the above plus exclusive FutaFighters comics that are a bit more hardcore.
These comics may not be suited for everyone. Might contain material slightly more offensive.
20$ and 50$ sub talk these people have been super loyal and every once in a while I will ask supporters what comic or story they would like to see next.

20$ Tier
Rare Tier posts you will get to see 50$ requests that I think are too spicey for other tiers.
I'm a storyteller and I hate posting pictures of characters that are not meant to be fucked until later in a story. You also get to request to see one character in a simple solo centerfold type pose once a month. Just ask

50$ Tier FutaFighter Master Once a month Request tier or Master donator.
Message me before joining or join at your own risk. If you join without messaging me you are joining to donate big and get a chance for a monthly request.
I TRY to take requests every month from my 50$. Some of these requests I may or may not decline meaning you should ask me before joining. I do what I want not what you want and if I like what you want bada bing bada boom request granted! Sometimes I might be busy taking a bunch of requests so you've been warned!

Now if you have any other questions or just want more updates or to even just chat or talk to me or others that are into FutaFightering feel free to join my DISCORD! discord.gg/5q7ZS4X

$15 SubDriveWarning! Do not click this drive if you get offended easily!

20$ SUB DRIVEFor the most dedicated of fans. Will update

My Thorn environment posters. Who needs a bathing suit when you have tape?

I'm working on some environment posters! Things to hang up in the hallways or bathrooms or some o...