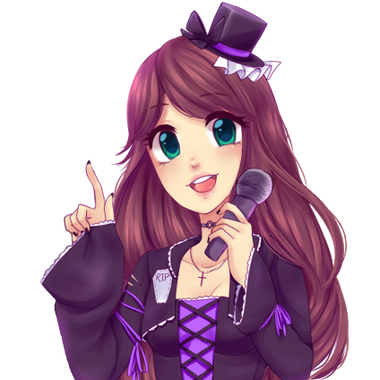 
No posting, selling, redistributing, and Re-purposing this audio.

((Alongside the old, abandoned path once known as Goseberry Lane, stands an old, creaking mansion that is known by all and feared by all. No one knows of it's history, now one knows when or even how it got there. Some say it suddenly appeared one Hallows-Eve night, long, long ago. The mansion is shrouded in mystery and terror, striking fear into both adults and children alike. For those foolish to call themselves brave enough to enter the mansion, legend tells they never exited the decaying house the same ever again. Broken beyond repair, their minds crumbling with every step they took off of the large dark porch and back into civilization's arms. Of course, that's what your friends told you. They explained that the mansion has four levels everyone has to go through in order to survive the terrifying building's horrors within. The levels vary from person to person, depending on what it is exactly that they saw when they were gazing at the house of horrors from afar. Some say they saw a tall, curvy witch gliding around the upstairs library. Some say they saw a glowing spirit of some sort, sitting sadly alone in the living room. Some even say that they saw a woman standing in front of the attic window. One even said she looked almost like a very familiar headshot seen on the national news. Because of all of these sightings, the youth of your town had dubbed the old mansion "Monstergirl Manor". *A bunch of thunder striking*))
((It was Halloween eve, and you were stumbling home dru-nk with your best friends after a party. You were too intoxicated to realize that they had taken the wrong turn, and before you knew it, you were standing in front of the dreaded Monstergirl Manor. Your friends, not being your friends, teased you and urged you to go inside. You boldly and very dru-nkenly stated that the house was just a pile of rotting wood, and you agreed to go up to the front porch. The wooden steps creaked as you climbed upwards, the massive, looming door waiting just a couple of steps in front of you. There was a large window to your left, and with a dru-nk smirk aimed back at your friends, you looked through it. No supposed lonely ghost girl to speak of, you called back to your friends. One of them shouted at you to knock on the front door. A pang of fear shot through your body, but you couldn't back down from a dare. So you strolled nervously up to the door. The wood seemed to stretch vertically before your eyes, and you reached out, balling your fist and knocking once... twice... three times. You waited quietly, seconds seemed like minutes are you stood in front of the entrance to the infamous building. You jolted as you heard your friend call to the rest of the group that he's found an entrance into the basement.))
((Your friends urge you off of the porch, and all of you stand around the small window leading into the basement. You looked down at it, then at your friends. Despite your dru-nken haze, you knew exactly what all of their mutual, smug faces implied. So you simply sighed, your breath smelling of alcohol, and squeezed through the window. You dropped a little bit, onto the floor below, looking around. The walls and floor were coated in cracked concrete. the room illuminated by a singular eerie yellow nightlight, flickering in the far right corner. The atmosphere smelled musty and foul. You raised your wrist to your mouth and nose, turning back around to ask your friends to pull you out, but to your despair, the window you had previously climbed through, vanished. You froze in place, the aura of the cold, dark, wet room suddenly turning much more sinister. You could feel malice hanging in the air as you slowly turned around, and along the walls and sprouting up from the concrete floor, were fungus of seemingly endless varieties.))

[Public] Elf Woman in the Forest Pool, Bathing by Starlight

No posting, selling, redistributing, and Re-purposing this audio.

As the audio opens, we hear the sounds of the elf woman bathing in a forest pool at night. Perhaps for the first few moments, she is humming, soft and sweet … or just making soft little noises as she bathes.
softly You can come join me, if you want to. … Yes, I know you're there, just beneath the trees, watching me bathe in the starlight, in this forest pool. You were here last night, too, weren't you? And the night before? And the night before that. Watching me. Watching the water trickle down my breasts … and thighs? breathing soft and quivery You’ve been very quiet, for a human girl, but … I knew. I was frightened the first time. I heard you there in the forest and I thought you might be a goblin, come to ravish me. But you’re no goblin, and I … might not mind if you rav- blushing, suddenly flustered What am I saying?


No posting, selling, redistributing, and Re-purposing this audio.

we hear soft, exotic music, and the rustling sounds of the naked princess shifting on the silk sheets, soft little noises and frightened breaths from her, then the sudden drawing aside of a curtain, and a gasp as she catches sight of the listener gazing in at her
It’s you – the shah. Why have I been brought here? Where are my clothes? Please!
rustling

frightened breaths Yes, I’m holding this silk pillow in front of my breasts and my gentle thighs, because it’s all I have. Or you’d see me! The other girls in your palace took my clothes. Please, where are my gowns? Please tell me. I feel so vulnerable, naked and soft in this bed … breathing fast … in the moonlight.

gasps Oh, you ... you’re undressing, too. nervously You don’t need to do that. I can be the only one naked. I don't mind, really. I can be naked. You don’t have to be naked, too, just to reassure me. Here, see? I ... I’ll put the pillow aside. quivers in fear See? See how brave I am? I don’t mind. You don't have to strip naked.

Oh no no no, you look good. You look wonderful. Just ... strange. You’re so much ...
she searches for something to say, helplessly

…you’re so much. Big. And that ... whispers between your thighs.

shyly You don’t have a flower like I do.

whispers, awed What is that? Hard and throbbing and thick in your hand?
gasps

shyly It frightens me.

No posting, selling, redistributing, and Re-purposing this audio.

There is wind. We hear distant gunfire, the roar of descending dropships, and then, nearer, the tread of combat boots over loose gravel. A little distance away, the radio at the woman’s belt crackles. Then a woman’s voice over the radio says, “They’re flanking us. Get that artillery up!”

the footsteps stop once they get close.

Do you hear the wind, soldier? It’s always so cold here, on this planet. Every time we drop.
a soft, amused sound No, you’ve made this drop before. You just don’t remember. But never mind that now. a sigh What have they done to you, soldier? Scorch marks on the right side of your face, that wound in your side.

a catch in her breath

You’re dying. softly I’m so sorry. I tried to get here in time, but…

the sounds of gravel as she crouches

Let me take a look. Here, shhh, shhh, it’s okay. It’s okay. I’ll cup your cheek in my hand. Oh, my beautiful warrior. Do you think you can stand?

Oh no. No, no-no-no. Here, let me get … grunts … my shoulder under your arm. Fuck, I forget how BIG you are. Shh, shh, it’s all right. I didn’t get to be sergeant by being weak. I can carry your weight. Come on. Let’s get you up that ridge before we’re surrounded.

Got separated from my squad. If we can get to another alpha drop squad and find you a medic …angry No, that’s enough of THAT talk, soldier. You are NOT laying back down. Just one foot in front of the other. devoted, passionate I’m going to save you.

No, I don’t think we’ve stopped the planetkiller yet. This side of the ridge, we’re badly outnumbered. Your pod wasn’t the only one they shot out of the air. That was a BAD landing. Come on. Come on.

[Public] May I Have My Pelt Back?

[Public] Becoming A Home For A Girl From The Streets

I’m finished now, Sir. Thank you for letting me borrow your shower. And the clothes you gave me… The ones I had were just rags and full of filth. I didn’t really think about it until you gave me these fresh ones.

Mhm! They’re really comfy. Too big, but I like sweats to be big! So these are great.

Yes, sir. It felt very good to really get to wash myself and not just get a 5 minute shower at the Shelter. It’s been months since I was this clean. It might sound a bit crude, but… I didn’t know I could smell this good. I mean it’s not me per se, it’s your showergel. I’ve always appreciated lavender.

I probably shouldn’t have told you that… I’m sorry, I just… I feel a bit out of place here. You have such a nice home. I’m so shocked by all of this. I don’t know what I did to deserve your kindness.

All of it, sir. You let someone like me into your home, you let me borrow your shower, and you even lent me fresh clothes. You… you made me food. Actual Carbonara. I haven’t had a meal like that in so long.

Well, I haven’t been starving. And I don’t mean to insult the soup kitchen I’ve been going to. Their food is healthy and nutritious. To the extent that can be expected anyway. And the people are lovely. I appreciate what they do more than I could ever put into words. They’re literally saving lives.