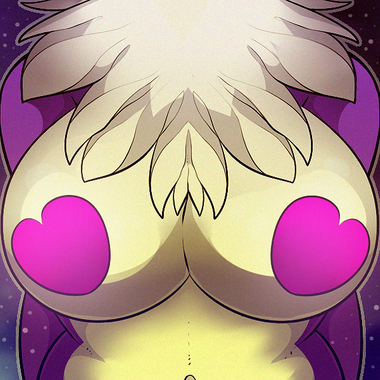 Ronoae
Weird porn.
Jan 24, 2020 06:22 AM
Public post
This content was created for artistic and entertainment purposes FOR ADULTS ONLY and may include pictures and materials that some viewers may find offensive. If you are under the age of 18, if such material offends you or if it is illegal to view such material in your community please exit the page IMMEDIATELY. All depicted characters are fictional. No live victims were produced during this content creation and no harm was imposed upon any live creature. All characters depicted in sexual situations are 18 years of age or older and of the age of consent, even if it looks otherwise. Acts depicted are all consensual.

Written to explore the character's interactions. Features Do, Trevor, Eos, and mentions a few others...
#furry #filming #2020 #trashy

“You’re gonna pound her into dust!” laughed a nearby voice, clapping his hands together in time with each thrust. “C’mon smack her a few more times! I wanna see red through her fur!”

A white ibis grinned towards the camera, winking as his hand came down hard on the ass of a girl, her ass up and upper body obscured out of the film’s view. His other hand was squeezing her hip hard enough to bruise, his own bucking furiously into the upturned ass as its owner whimpered and moaned beneath him.

“Heyyy, say hi to your boyfriend for me, slut!” he snipped, giving a peace sign to the camera as he continued to fuck her with the vigor of a ram. “You’re a tight, wet little thing, I bet he’s jealous! Think you can say his name for me? C’mon, shout! The mic won’t pick it up if you’re being a whiny little bitch!”

“T-Tom--!” she almost sobbed off-screen, her hips thrusting back against the other.

“Good girl! Hi, Tom! Bet you wish you could fuck her like this, right?” he wasn’t even breaking a sweat, pounding her to the rhythm of somewhat obscured club music in the background. “To bad!”

“Be nice Trevor! What if he wants to fuck you?” the voice from off camera chimed.

“My ass is VIP only,” Trevor turned, pulling his ass apart to give the camera a good view of his asshole and taint, shamelessly showing off for the crew as he fucked the bitch beneath him raw.

“Some lenient VIP,” a different voice added, followed by a dark chuckle.

“Shut it! Good dick is good dick, you’d know if you let me fuck you for once!”

The furry beneath Trevor trembled, moaning as she came around his cock. That didn’t stop him, instead earning her a hard slap on the ass and even rougher treatment.

“Gross,” chuckled the deeper voice, “alright, let’s get a good view of her.” At his command the cameraman moved around to see the full girl, a fluffy white canine with her tongue lolling out, saliva and tears streaking her face while her eyes crossed in absolute bliss. Trevor’s foot could be seen come into frame briefly as he kicked her over onto her side, stomping down on her hips and ass as the camera moved up to see his triumphant pose.

“Another bitch conquered! Can anyone stop me? Wanny try?” he leaned in, pointing to the lense and winking at the unseen audience.

“Cut!” a snap, likely a clapboard, sounded as the camera’s recording light flicked off.

“Think we’ll make bank on it?” Trevor chuckled, disregarding the girl on the ground and walking off the scene, cock still dripping with fluids.

“Don’t we always?” a peacock snorted, his vibrant feathers fluttering as he stopped to high-five his ibis friend.

“Now now, let’s not celebrate too soon,” the looming presence of a flamingo stepped forward, his height dwarfing the two other birds and canine alike, “We need to do all the fun stuff now; titles, description, edits.”

“Don’t be a downer,” Trevor snipped, grinning up at the flamingo, “we always make bank.”

“Never assume,” he grinned back, reaching up to brush styled purple hair out of the way of his bright pink and white sunglasses. The massive bird strode off, tail feathers flicking in amusement as he listened to the others chittering behind him. Oh what fun it was to work with other avians.

He went back into his office, a surprisingly sparse little room with only a desk, computer, and landline. The latter looked incredibly dated, a stark contrast from mahogany wood and Pawbook laptop. Even the chair looked more modern, a sleek black office chair that screamed
“I’m the boss.”

“Doooo,” a little voice came from the desk as a little wolf boy popped up from the chair. He was barely four feet tall, a small, grey canid with fluffy baby pink and blue ear tufts eagerly wagged his fluffy dual-colored tail, leaning forward on the desk and grinning. His pink and blue hair, matching the rest of his brighter features, was twirled idly between little grey fingers. “How’d it goooo?”

“Well enough for a nice bottle of wine,” Do grinned back, sitting on his desk. One long leg crossed over the other, clad in cream leggings sporting little crown designs. “To bad I have to pay those losers, or I’d release it free. Will definitely send a copy to “Tom” though,” he clicked his beak in obvious amusement.

“Tom? Her boyfriend, right? Stupid fucking cuck,” the wolf playfully stuck out his tongue. “I already got his location~ Want me to deliver?”

“If it’s no trouble,” he chuckled, reaching out to pat the canid on the head. Do was growled at, but there was no vitriol behind it.

“Yup yup, whatever you say boss. Want anything else done?”

“Oooh, so many things,” he sighed flippantly, leaning back on the desk a bit. “Give me the world, Eos!”

“You already got it, boss,” the little wolf grinned, “it’s called money.”

“You’re right,” he sighed dramatically again, grinning, “maybe send daddy the tape then, I want him to see how good his little boy has been doing all on his own~”

“Think this one will kill him?”

“If he didn’t drop dead of a heart attack last time, I fear I may be unable to off him subtly,” he brought the back of his hand to his forehead in mock-woe. “So let’s not get our hopes up, hm?”

“Hopes dashed again,” Eos teased, jumping up onto the desk and into Do’s lap. The flamingo was a solid five feet taller than him, making Eos look even tinier by comparison. “Ooo, but I do got some drama for you, if you want it?”

“You say such a thing as if I’ll say no,” Do chuckled, scratching Eos behind the ears.

“That big bitch ‘rex got another one,” he leaned up, paws on Do’s stomach as he tried futilly to reach his face, “and I think this one was a cop. Dunno what he did, but they already cancelled the investigation. You wanna try to get the next one on tape?”

“Awww! But you love a challenge!”

“And I love not having dinosaur spit all over my feathers.”

A knocking pulled the two from their conversing, the office door opening a moment later to reveal a now-dressed Trevor. He sported a black crop-top with a golden middle finger (the “bird,” rather) and dark jean shorts that were tight enough to show off his junk.

“Hey ‘mingo babe, I got one for ya. Better Bird Bust Busty Bitch,” he laughed, stepping inside and leaning on the nice desk.

“And?” both laughed, though it was clear that Trevor found it far more humorous. After a moment he continued, “Alright so, seriously, where we goin’ next?”

“You think I’d push for something else so soon?” Do feigned offence.

“Bitch I KNOW you will. You live for this trashy shit just like I do. Hell, I don’t think most of that video is even gonna be fuckin’. It’s just gonna be a display of pure, crass fuckery.”

Do glanced down at Eos, who smiled slyly back up at him. Leaning up to whisper, Do listened as his devious little friend gave him a myriad of suggestions. Oh he was so glad he’d hired this little fuck, he had such creative ideas!

“Let’s get a little bitch-- like a little fennec or something-- and a big fat futa to raw you while you split the little mammal in half,” he finally stated, reaching up to push his sunglasses further onto his beak.

“You’re not thinking the little white and green escort, right?”

“Ew, no,” he waved a hand dismissively, “since when was he good enough to work with me?”

“Good, just checking,” Trevor smirked, “we got any other fennecs on record?”

“Not right now. We can settle for something else, ‘long as it’s small enough to be ruined by your cock.”

“I can ruin anything with my cock,” the ibis winked, grabbing his package through his shorts.

“Mmmmmm of course you can, dear,” Do taunted, “let me do some research. I’ll send a couple “friends” out to find someone dumb enough to take the bait.”

“You’d have to be dumb to turn down your pay, babe,” Trevor huffed.

“Dumber, then. We don’t want anyone smart enough to complain, do we?”

“What about a rabbit? I got rabbits,” Eos piped up as the door closed, “fat ones, skinny ones, hybrids… think there’s a squirrel around, too. Or maybe that’s the hybrid?” He rambled off species of small mammal for a moment before shaking his head, “Wait, lemme guess: whatever I bring you?”

“Bingo,” Do pointed down at the little critter, giving him another pat on the head. “Oh yeah, get some info on your other friends for me, would you? I don’t need any surprises from your co-workers.”

“You got it,” Eos winked, snapping his fingers and vanishing into thin air.

“And don’t bring me something ridden with diseases!” the flamingo shouted after him, raising a fist to the air. Oi, you had to be so specific with their kind.

The landline beside him began ringing, prompting Do to glance at the caller ID. Although a name wasn’t present, he recognized the number, a sly grin working its way up his beak.

With little hesitation the phone was lifted to his ear, a voice on the other end beginning a string of profanities that only had the devious flamingo’s laughter echoing around his office.