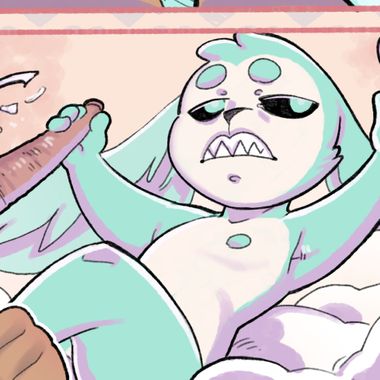 Blattarieva
By proceeding, you confirm that you are
at least 18 years of age.
Yes, I choose to proceed
Cancel
Cancel

Toss a coin to your blatt-cher

Support your local pornographer and enable the creation of more weird lewd art into the world!

Enjoy seeing stuff i make in advance as well as the smug sensation of helping make them possible in the first place with your support.

Enjoy everything from the previous tier, plus either PSD files or procreate/speed painting progress videos of my art, and the thrilling satisfaction of helping me make more comics.

A tier only for the manliest of men, the most glistening muscled experts in the art of supporting artists so they may continue to create cool shit.

Patron of the arts tier

For the manliest of chads only. Tier rewards include my undying loyalty and at least 70 virgin goblin brides.

TS + big dick TS speed drawsFor some reason, Procreate has been exporting these with the contrast...

Another ithrium speed draw! it’s exactly what it says on the box fellas!

Another Ithrium pic! here’s a quick full color illustration i did as a warm up. I am really enjoy...

KINK SUGGESTIONSI wanna play around with more kinks n fetishes. is there anything in particular y...

The suspiciously tiny characters updatesubstar mobile interface is a nightmare to use, so less bl...

About comics and the Discord


I was taking a gander at my exit surveys and noticed a few unsubs relating to comics ("I was told there would be comics") and the disappearance of the blatscord.
I explained both a few times in answer to private messages, but i should probably take the time to explain it for all to see.

Warning, this is long and wordy. You can skip to a TL:DR at the bottom.

About the Blatscord:
The echo-chamber of discord servers wasn't healthy for me, so i stopped using it (outside of keeping in touch with a couple of close friends) and left the blatscord in someone else's hands. after a while, the idea of my own server still being up without me around made me too uncomfortable, so i nuked it for good. In short, it didn't spark joy anymore.
It's been over a month since i took it offline and I don't regret it, so it's safe to say the decision is final.

About comics:
The thing you have to know about comics is they require at least three factors to exist: time, hard work and passion.
In order to make a comic, I need a vision- a story i want to exist, for myself mostly but also so it, hopefully, resonates with others as well. It needs to be something I'm passionate enough about to want to spend many hours every week working on it. This means hard work and time, and time is money.
For reference: a color commission with two characters takes me around 7-8 hours of work: a comic page in black and white takes from 4 to 6, and for color, that goes up to around 10 hours. But a color commission is a complete (paid) work, while a comic page is a part of a whole that means nothing on its own.
That brings us to the uncomfortable reality of my creative life, such as it is right now:

This subscribestar doesn't bring enough money to justify the hours upon hours of work a comic requires, and I'm no longer passionate enough about adult comics to sacrifice my personal life (such as sleep and social obligations) to draw them in my free time.

Also, I'm on prozac, so my dick don't work, but that's only a part of a bigger thing.

I'm still interested in adult art, of course. I think I've done a good job so far uploading original, polished art to thank you guys for your support, and i will continue to do so. But unless my page explodes for some reason or i suddenly become STRONGLY inspired by an idea, I'll keep doing what i'm doing now, which is posting illustrations and sketches rather than comics.